Exterior of the Building

Entry to Parliament House is from the parliamentary forecourt. Above the ceremonial doors (used only on VIP official occasions) is a stylised Northern Territory Coat of Arms.  The Coat of Arms, created in stainless steel and bronze, is the work of Darwin artisan, Geoff Todd.  Parliament House was designed for Darwin's tropical climate. Its facade diffuses 80% of direct sunlight.  Visitors are invited to note the top of each of the corner columns of the building, which represent an architectural salute to the site on which Parliament House stands.

Interior of the Building

A feature of the foyer is an embedded stylised Desert Rose, the Northern Territory floral emblem, also crafted by Geoff Todd.  The seven petals of the mosaic symbolise the six States of Australia and the anticipated seventh State of the Northern Territory.  The petals are Indian granite and the centrepiece is made from granite from Tennant Creek. Other materials include local Mt Bundy granite, South Australian granite and Tolga granite from Sweden. The emblem also incorporates stainless steel and bronze radiating arms between the petals.

The 550m² Main Hall is accessed from the foyer and is adjacent to the ceremonial doors of the Assembly Chamber.  The ceremonial doors are fitted with solid bronze handles which were designed and manufactured by Michael Metzaros.  The Main Hall floor is Mt Bundy, South Australian and Tolga granites.  This area is used extensively for Parliamentary and Government receptions . Access to the Northern Territory Library, the Speaker's Green and Speaker's Corner Café is through the Main Hall.  A feature of the Main Hall is the pendant lighting suspended from the ceiling. The glass vanes of the pendants are green (to signify a lower house of parliament) and etched with eucalyptus leaves.  They were designed by a Darwin interior designer, Joe Librio, and constructed in Bellingen, New South Wales.

A Northern Territory Crest is displayed on the mezzanine. The Crest incorporates the floral and faunal emblems of the Northern Territory, the Sturt Desert Rose, the red kangaroo and wedge-tailed eagle respectively. On the Crest, the eagle's wings are spread and its talons grasp an Aboriginal (Arrernte) tjurunga stone. Beneath the eagle is the plumed helmet of the warrior, which signifies that the Northern Territory was an area of wartime battle.  Two red kangaroos hold shells that are found on the northern coast of the Territory; the Chiragra Spider Conch and the True Heart Cockle. At the base of the crest is the Sturt Desert Rose placed upon a grassy sandy mound.  As well as acknowledging the geographically diverse aspects of the Northern Territory, the Crest represents its indigenous population. The x-ray relief depiction of the female figure and the centre of the shield is derived from sacred rock art in Arnhem Land. The motifs on either side of the figure symbolise representations of campsites joined by path markings of the Central Australian Aborigines.

The Legislative Assembly Chamber, while designed in an uncompromisingly modern style, incorporates evidence of the Northern Territory's history, together with its inherited Westminster Parliamentary tradition. A ceremonial first Sitting was conducted on 4 October 1994 and guests included Presiding Officers from interstate and Pacific region Parliaments.

Surrounding the Chamber are three public galleries, two of which are open while the third is enclosed by glass. The glass gallery is frequently used by students so they can be briefed while observing the Assembly in session. Total seating capacity in the public galleries is 200.

The fourth gallery, located above the Speaker's Chair, is the parliamentary Press Gallery and behind it are located interview rooms and a broadcast studio.

The Speaker's Chair is crafted from Tasmanian Black Oak and leather and was a gift from the Commonwealth Parliament on the occasion of the official opening of the building.

Parliamentary debate is recorded by five video cameras which are recessed in the acoustic panelled walls. Two are located on either side of the Chamber, while the fifth is located beneath the clock facing the Speaker's Chair. These cameras are connected to the voice-activated microphones on each desk and are controlled by the Hansard unit.

The doors on either side of the Chamber lead to the respective Government and Opposition Lobbies where Members may make telephone calls, meet with their staff, etc, while being able to view proceedings in the Chamber by the parliamentary broadcast system. Provision for a separate lobby for independent Members has been made behind the Chamber.

The Table is made from Tasmanian Brushbox.

The Speaker's Green is an impressive, expansive turfed area located on the western side of the building overlooking Darwin Harbour and The Esplanade. It is used for Parliamentary and Government functions and is a popular venue for wedding ceremonies.

The Desert Rose floral emblem is emphasised at the base of the fountain on the Speaker's Green.The fountain is dedicated to Peter Malmstedt and Andrew Snow, who lost their lives when a crane collapsed during the early construction phase of the building in March 1991. 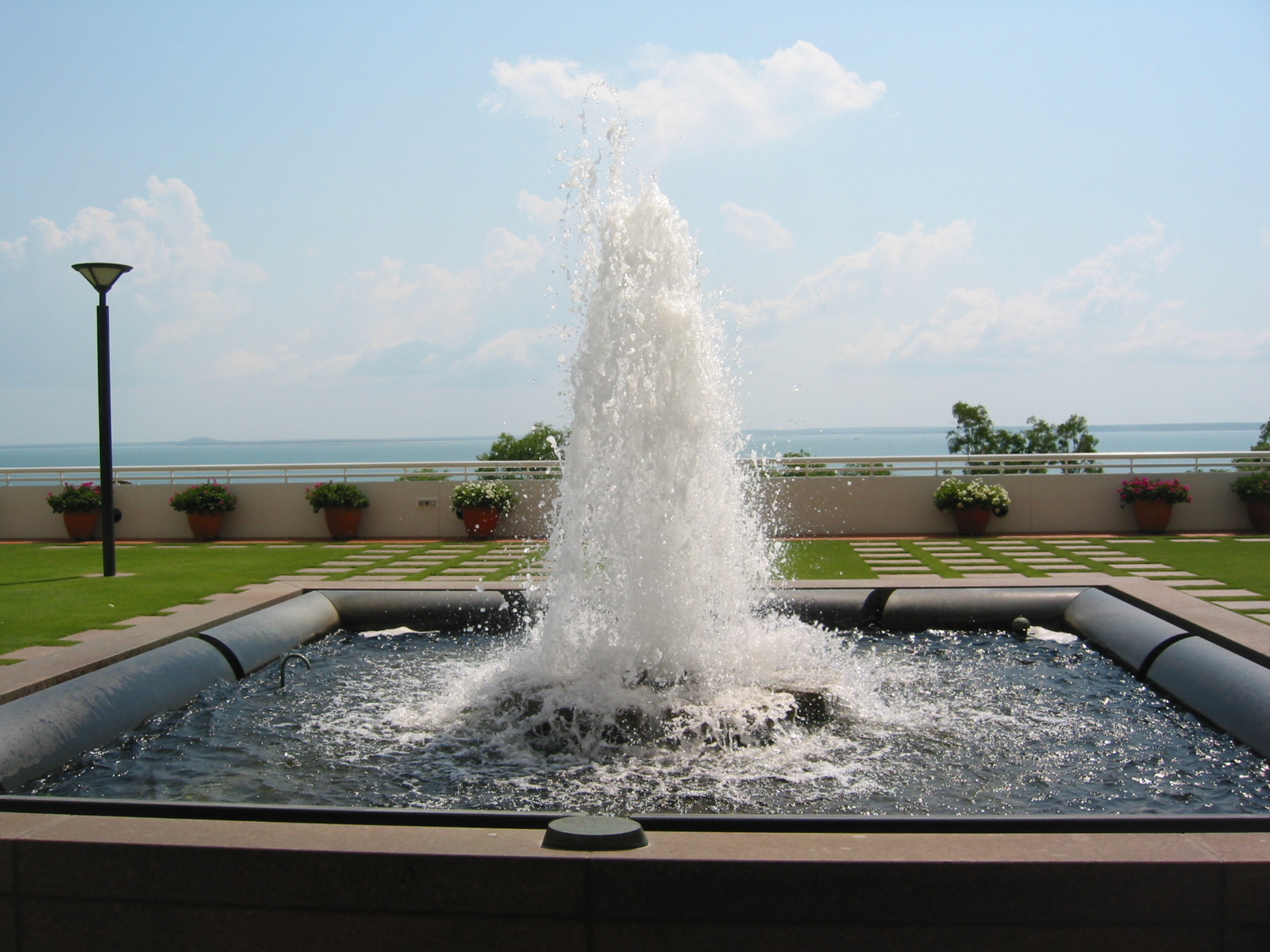 From the southern side of Speaker's Green, Government House, the official residence of the Administrator, can be viewed.  This is a magnificent old tropical building dating from 1871 and survived cyclones in 1897 and 1937, the first bombing of Darwin in 1942 and Cyclone Tracy in 1974.

The Parliamentary Portrait series is exhibited on the mezzanine and its subjects are Chief Ministers and Speakers since the appointment of the first fully-elected Legislative Assembly in 1974.